A confirmation and delineation drill program in December of 2020 was the Company’s first drill campaign at Golden Mile.  The campaign not only confirmed the historic third-party high-grade drill results, but further delineated the gold mineralization and associated geologic structures.  The 4,294 hectares (10,611 acres) Golden Mile property was acquired in June 2020.  The property contains two known zones of mineralization, the “Golden Mile” and “Springs” areas.  The Golden Mile mineralization is located on five patented claims and includes a database of more than 100 historic third-party exploration drill holes.  The Company’s initial drill program included nine confirmation and delineation diamond core holes confirming a portion of the historic drill hole database.  In addition, four large-diameter “PQ” (6-inch) diamond core holes were drilled for confirmation and metallurgical testing.

“We are very pleased to have confirmed and further delineated the high-grade gold mineralization at Golden Mile,” stated Mr. Barry Devlin, Vice President of Exploration for Fortitude Gold.  “In addition to validating a portion of the historic drill database, we have obtained sufficient material for column leach testing and that material is now at a third-party metallurgical process services company specializing in heap leaching. We are excited to begin our second drill campaign to further delineate and expand this mineralization.  While there is a fault structure controlling the mineral to the southwest, the mineralization is open at depth and along strike.  Our next drill program targets expanding and pulling more mineral into the initial resource and open pit shell design.” 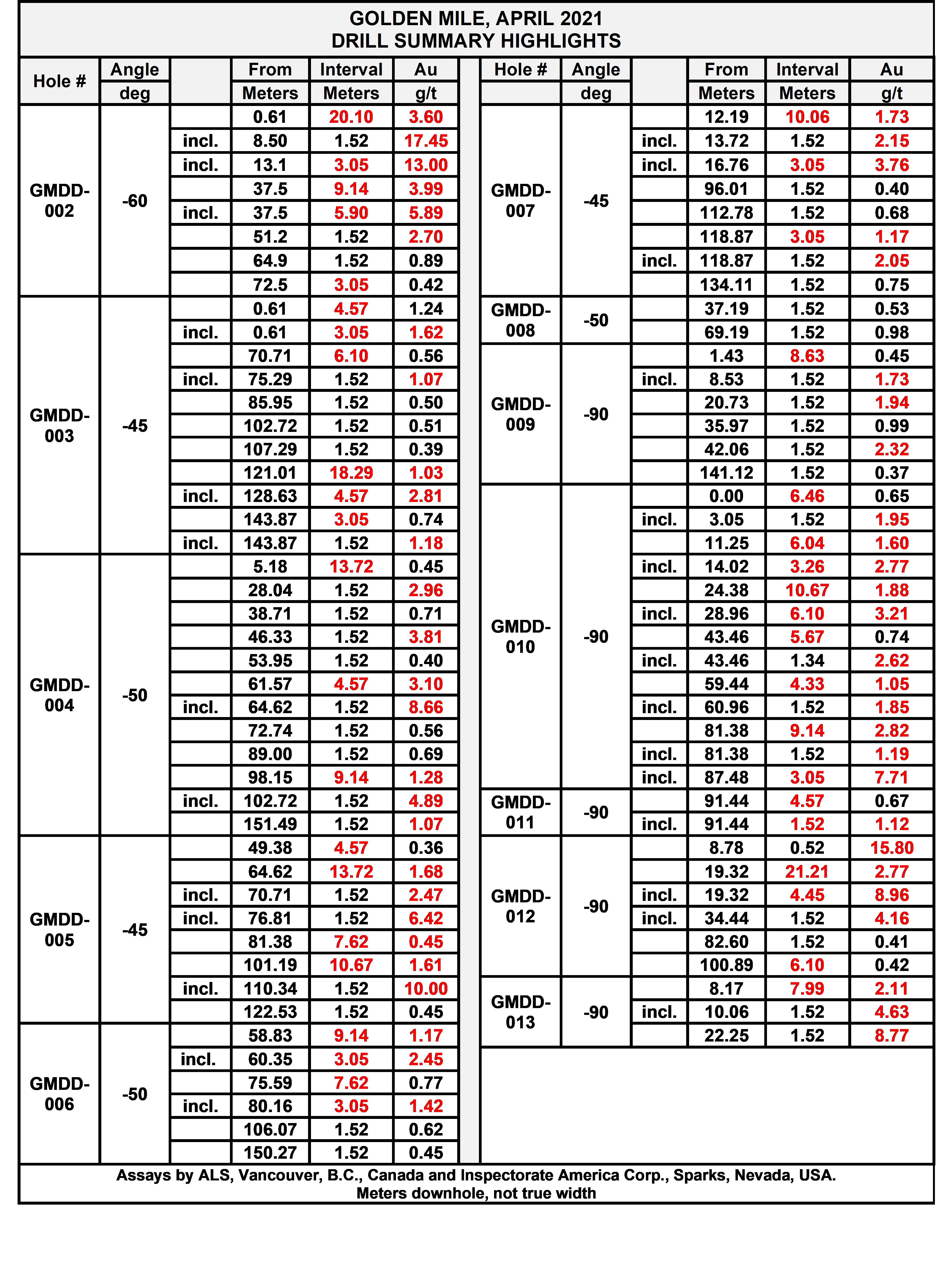 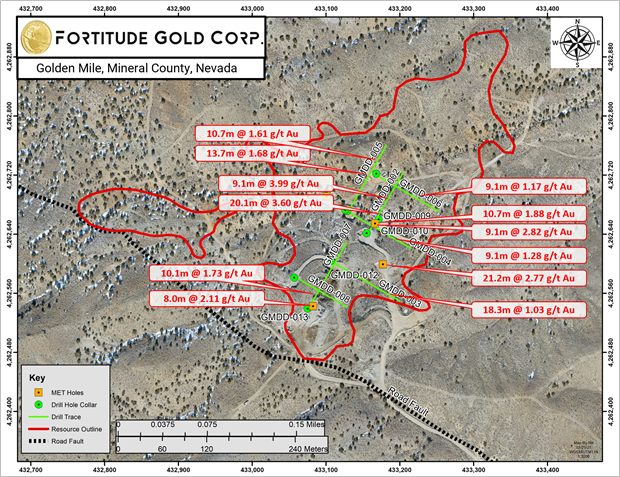 “Drilling over 20 meters of 3.60 grams per tonne gold less than one meter below the surface underscores Golden Mile’s potential to become an open-pit mine,” stated Mr. Jason Reid, President and CEO of Fortitude Gold.  “We are moving the property forward on numerous fronts towards a potential production decision including a second drill campaign to further delineate an initial Golden Mile resource, ongoing engineering of the open pit design, initiation of metallurgical heap leach test work and we are conducting base line and other studies in preparation for project permit submissions.  Having already confirmed the cyanide leachability of this material with initial preliminary test work, column leach tests currently underway are expected to define the mineral’s heap leachable characteristics to help engineer the correct process needed to recover the gold.  The preferred project design under evaluation is an open-pit heap leach operation taking gold to carbon and then transporting loaded carbon to the nearby Isabella Pearl project’s ADR plant for final dore production.  While several project due diligence items remain, it is exciting to see the developing potential at Golden Mile and at what could become Fortitude Gold’s second open-pit heap leach gold mine.” 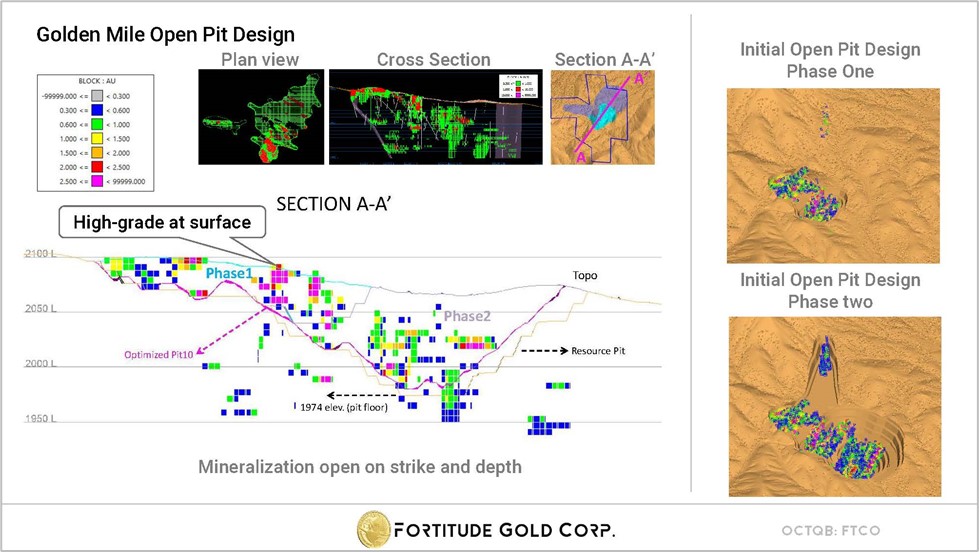 The Company owns 100% of over 13 kilometers (8 miles) of prospective ground within the connected Golden Mile and Mina Gold properties.  While the Company targets its initial Golden Mile resource in 2021, there are two additional areas of known mineralization along this trend.  The Spring and Mina Gold areas of mineralization are both in the initial resource delineation phase and warrant additional drill campaigns.  In addition to these three known areas of mineralization, the large district sized land position contains numerous targets from which to potentially discover additional mineralized areas (see map below). 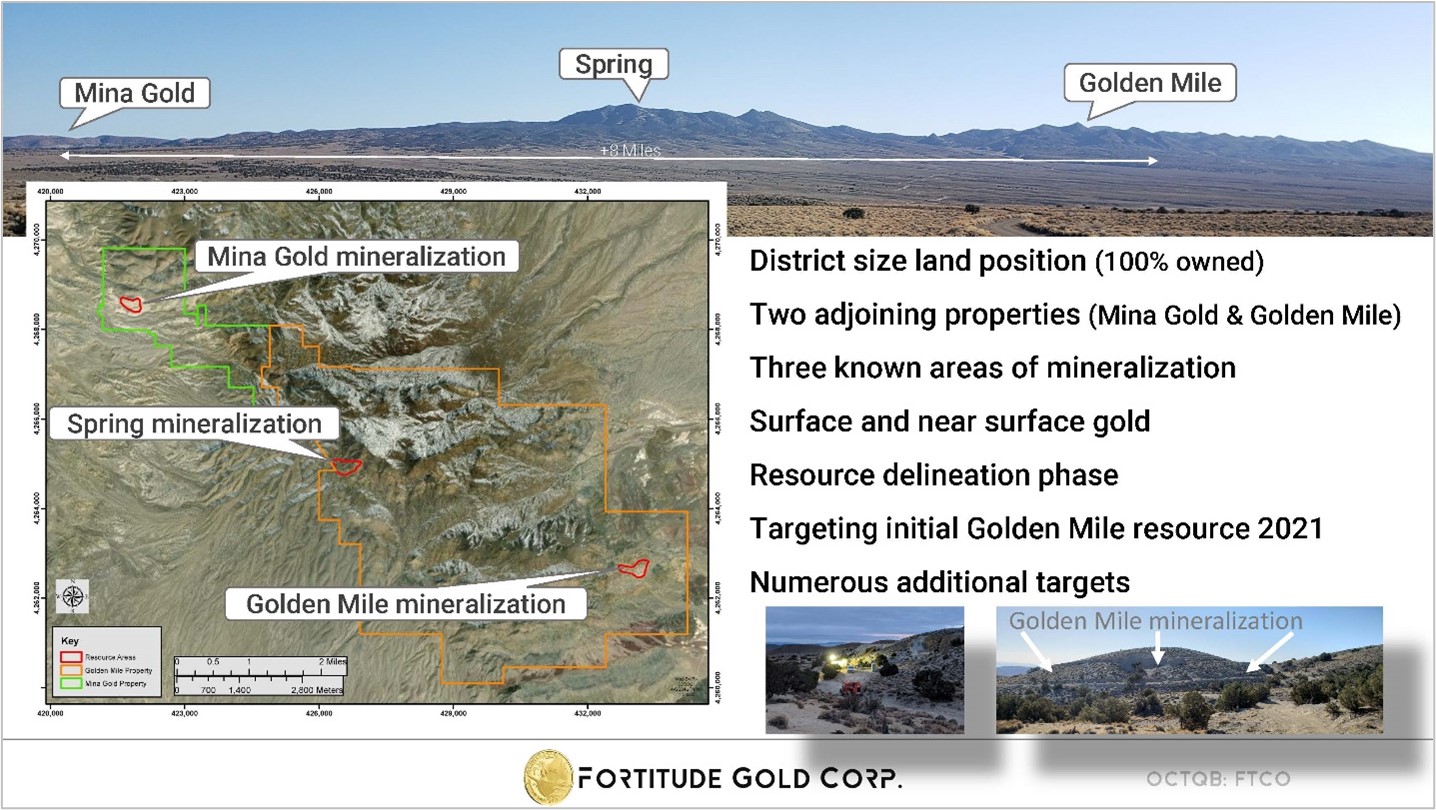 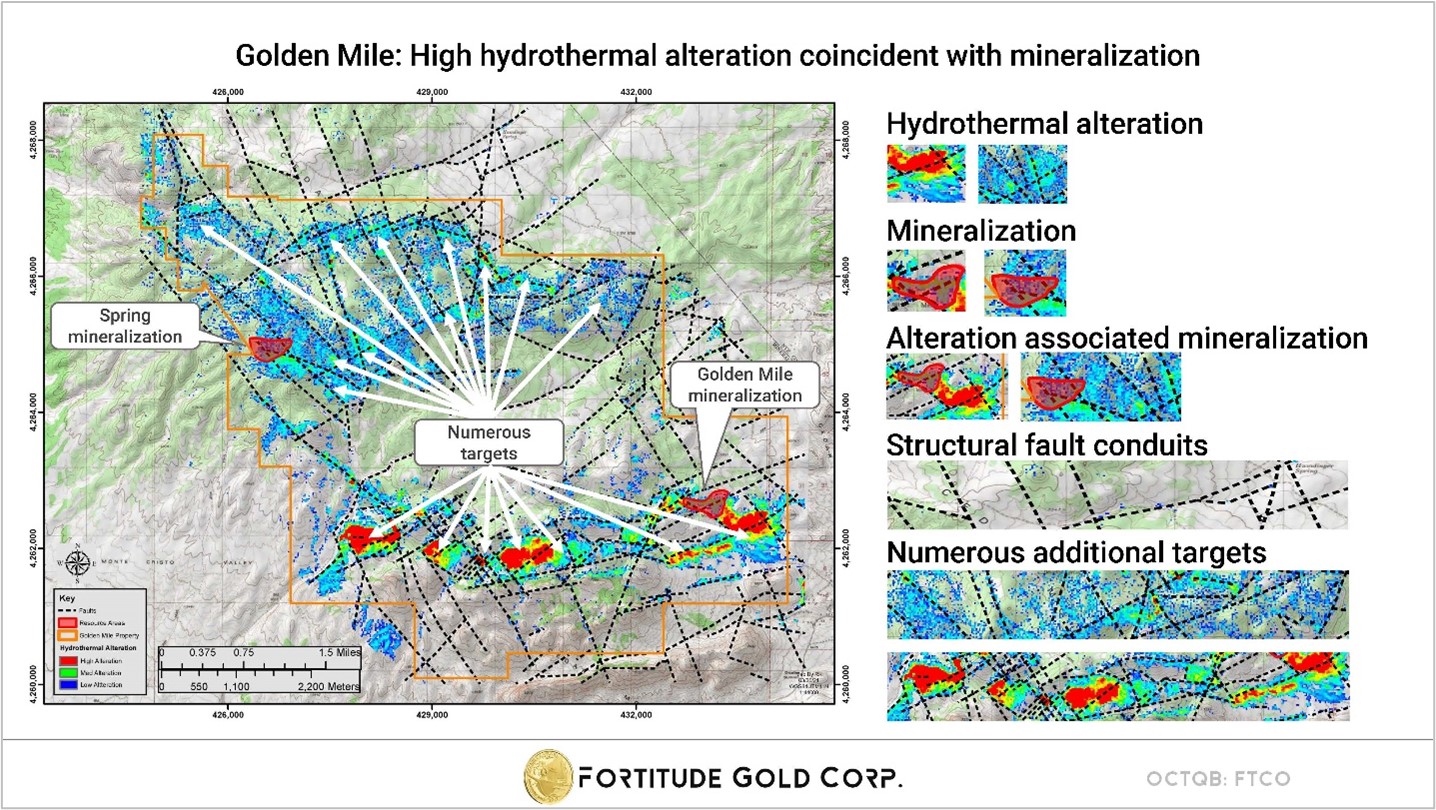 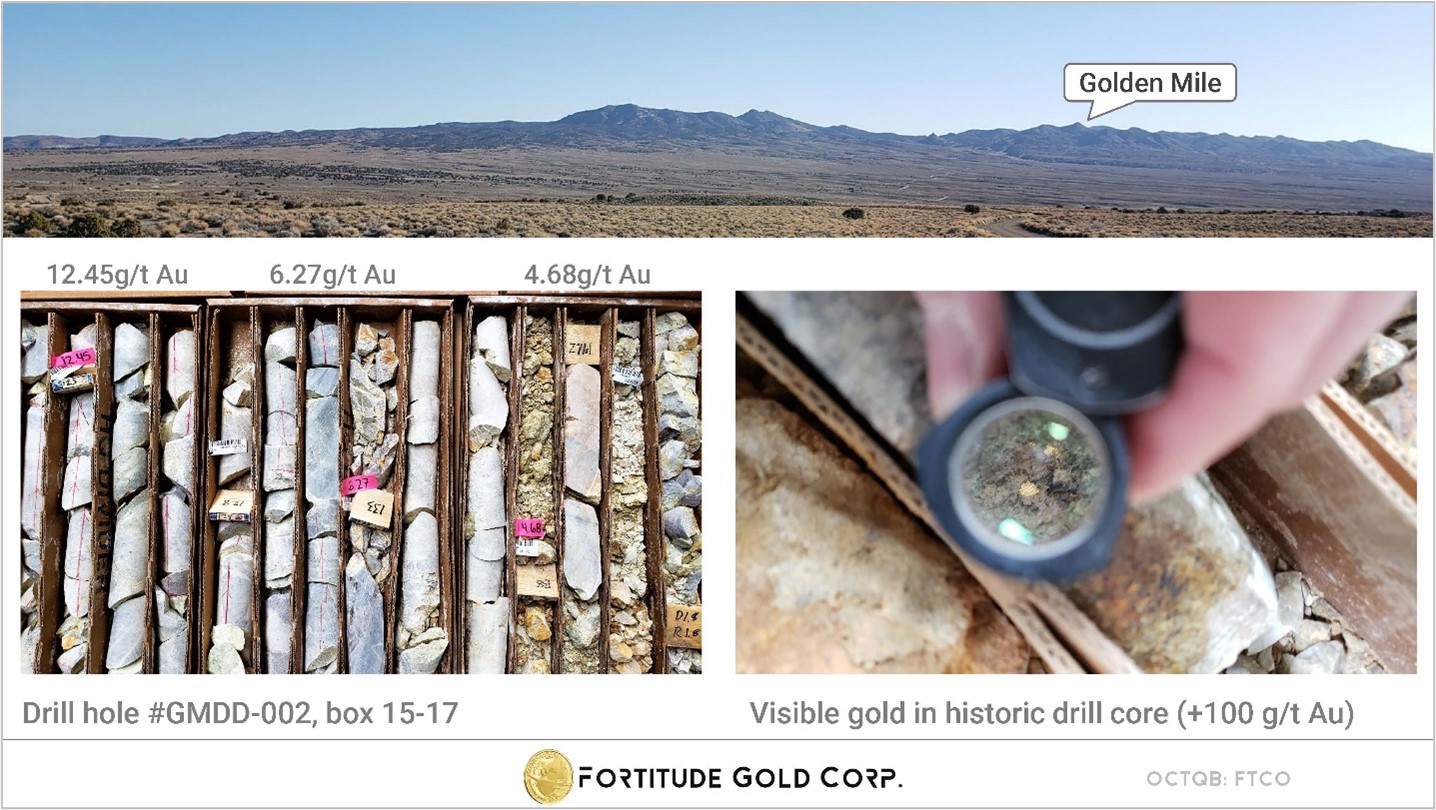 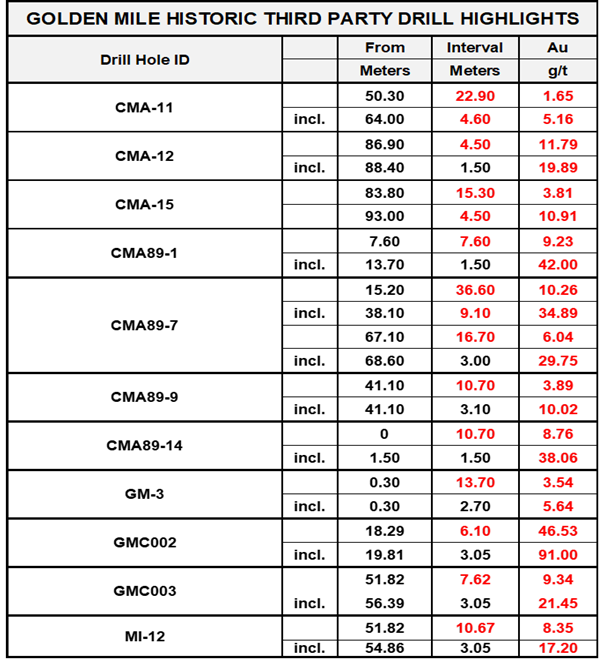 Forward looking statements involve a number of risks and uncertainties, and there can be no assurance that such statements will prove to be accurate.  The Company's actual results could differ materially from those discussed in this press release.  In particular, the scope, duration, and impact of the COVID-19 pandemic on mining operations, Company employees, and supply chains as well as the scope, duration and impact of government action aimed at mitigating the pandemic may cause future actual results to differ materially from those expressed or implied by any forward-looking statements.  Also, there can be no assurance that production will continue at any specific rate.